Ugallu, the “Big Weather-Beast”, inscribed U4/UD.GAL-˹la˺, Akkadian: ūmu rabû, meaning “big day”, was a lion-headed storm-demon and has the feet of a bird who is featured on protective amulets and apotropaic yellow clay or tamarisk figurines of the first millennium BC but had its origins in the early second millennium. The iconography changed over time, with the human feet morphing into an eagle’s talons and dressing him in a short skirt. He was one of the class of ud-demons (day-demons), personifying moments of divine intervention in human life.

Ugallu was one of the eleven mythical monsters created by Tiāmat in her conflict with the younger gods, on the reverse of the first tablet of the Epic of Creation, Enûma Eliš. The tale describes how Marduk captured and bound the creatures, rehabilitating them with work reconstructing the world from the corpses of his vanquished adversaries. This transformed them into protective charms which would be used to adorn the doors of palaces, for example that of Ashurbanipal‘s southwest palace at Nineveh, temples, such as the Esagila of the Marduk temple as described in the Agum-Kakrime Inscription, and private dwellings (the bedrooms of the vulnerable) to ward off evil and disease.

Sometimes in pairs of ugallū, the beneficial protective demon finds special purpose in adorning the outer gates of buildings. 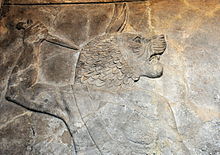 Wall relief depicting a head of an ugallu, a lion-headed man.

Ugallu first appears figuratively in the First Babylonian dynasty as a porter of the underworld, a servant of Nergal. In later times he is represented on amulets as frequently paired with the Sumerian demon Lulal, who was in many respects fairly similar in appearance. He is portrayed clasping a dagger, and described thus: “a lion’s head and lion’s ears, it holds a … in its right hand and carries a mace (gišTUKUL) in its left, it is girded with a dagger, its name is ugallu.

Manasa, goddess of snakes, worshipped mainly in Bengal and other parts of northeastern India, chiefly for the prevention and cure of snakebite and also for fertility and general prosperity. As the protector of children, she is often identified with the goddess Shashti (“the Sixth”; worshipped on the sixth day after birth). The written texts that contain her myth, the Manasa-mangals, date from the 16th–17th century but are probably based on an earlier oral tradition. She is also celebrated in a variety of songs, dances, and dramas in the villages. Manasa may be related to the nagas, legendary half-human, half-cobra figures in India.

When they got both of them, Ahriman is born to Zuvarn.