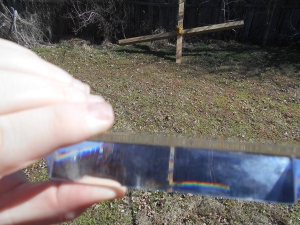 7 Colours of the Rainbow

Have you ever seen a rainbow? Sometimes when the sun is shining and it is rainy somewhere at the same time, you can see a rainbow. It’s a huge arch of colours in the sky. It’s caused by the light from the sun being broken up by water droplets in the atmosphere. The sun’s light is “white”, but the water droplets break it up into seven different colours, always in this order:

There is an easy way to remember them (a mnemonic):
– Richard Of York Gave Battle In Vain

These colours are the “visible” part of the sun’s radiation. But there are many other parts that are not visible to the human eye. For example:
– immediately below red is “infraRED”
– immediately beyond violet is “ultraVIOLET” (UV) 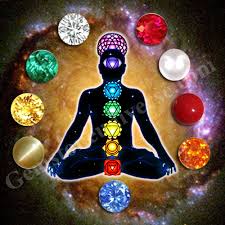 Since the beginning of civilization, gemstones have always been thought to possess metaphysical powers. All the main ancient cultures, Vedic, Egyptian, Mayan, and Greek,  had used these colorful and shiny pebbles for ritualistic, sacramental and healing purposes. The idea of using gemstones as solely item of adornment and wealth was a later development; yet, even this shift of perception, had originally an occult reason behind it.
Gems seems to have a special power, a transcendental quality that go beyond their colorful mirror, the thought of far away lands and mysterious places.
In ancient India, a number of Sanskrit texts on gems have been written.
Of a purely scientific, gemological knowledge are works like “Ratnapariksa” (literally ‘Gemology’), and “Mani-Mala“.  More specifically, the “Graha-Gocara Jyautisha“, the “Garuda Purana“, the “Brhat Samhita”, the “Agni Purana” are the texts dealing with planetary gemology.
As we already know, according to Vedic astrology, nine main gemstones are associated with nine planets. Associated with the sun is the RUBY,   with the moon is the PEARL,   with mars is the RED CORAL,   with mercury is the EMERALD,   with Jupiter is the YELLOW SAPPHIRE,   with Venus is the DIAMOND,   with Saturn is the BLUE SAPPHIRE,   with Rahu is the HESSONITE GARNET,   and with Ketu is the CAT’S EYE CHRYSOBERYL.

It is clearly stated in many passages of the different Vedic texts that  “inward luster, transparency, illumination with rays, sparkle, free from impurities and good formation of the shape are the characteristics of good gems”   (Agni Purana, 246.13-14).
“Gems are not good if they are sandy, cracked within, scratched, stained, if they are lusterless, rough, dull or mixed with mineral substances even though they may have all the characteristic features of their family“  (Garuda Purana, 70.18).
“Since a jewel (gem) endowed with good characteristics ensure good luck, prosperity and success to kings, and one with bad ones, disaster and misfortune, connoisseurs ought to examine their fortune depending on jewels (gems)“  (Brhat Samhita, 80.1-3).
“If anyone wears a gem of many flaws out of ignorance, then grief, anxiety, sickness, death, loss of wealth and other evils will torment him”   (Garuda Purana, 70.19).

A special attention needs to be addressed to the always-included emeralds. References from the Sanskrit texts claim that emerald inclusions are accepted, as far as the inclusions are not detracting from the overall transparency and beauty of the gem.
“Experts in gems are inclined to say that the following types of emeralds are of good potency: Emerald that has a pure, bluish green color or the color of a spring meadow, a soft glow, that is not highly complicated (referring to inclusions), hewn in different ways and appear to be stuffed with gold dust (still referring to very small inclusions);   Emerald that is endowed with qualities of shape, even shade all over, sufficient heaviness and shoots diffusion of light when sun’s rays fall on it”    (Garuda Purana, 71.12-15)

To summarize, a planetary Jyotish gem should possess an eye flawless clarity, appealing color, good cutting, and a sweet feeling or “life” that will undoubtedly be felt by the person choosing that particular gem. As a general rule, it is advisable that the gem be of the finest quality affordable, and…the larger the better.
The use of alternative gemstones is practiced as well, especially for those gems which can be expensive over two carats sizes, such as diamonds and rubies. It is found, however that the alternative gem has a milder effect than the correspondent main gem. See in the table below the alternative gems, metals, and fingers used to wear rings related to the main gem and the correspondent planet. 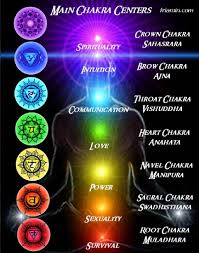 There are 7 major Chakra centers of the physical body, where vital energy flows and intersects.  Through our Chakras, we transmit and receive physical, emotional, and spiritual energy.  The chakras are manifested in one’s physical state.  The ideal is to have all chakra centers clear, balanced, and vitalized for optimal well-being.  The chakra system goes back to ancient eastern masters.  Each chakra is associated with a particular area of the body and a color of the spectrum.  Stones are used at chakra centers for clearing, revitalizing, and healing.  Crystal wands are utilized to open the chakras.  Generally, the selection of stones correspond with the associated color of the chakra.

As you become familiar with stones, meditation, healing work, and the energies within and around you, you will begin to incorporate your awareness into different aspects of your life and consciousness.  Studying and working with the chakra system will help you become aware of the powerful life force energy that exists within our bodies, minds, our environment, and ultimately the physical and divine universe.  Your body is indeed your temple!
Below is a brief listing of stones and their use with the chakra system to get you started.

If we are to destroy the light in a religious setting, it would be best to separate the light by use of a prism that refracts the light into a rainbow.  Then we use the Jyotish stones to absorb those light waves, and then we filter that down into the Chakra Stones.  The Chakra Stones will further absorb the light waves to continue the filtration process.  On the forth level, a Black Shiva Lingam partially placed in flowing water.  Not sure how we are going to piece this together, this will be a ritual piece left in the sunlight during the day.  Then, the Devil’s Yasna can disperse the energy for whatever the purpose will be for the ritual.  Plus, it helps charges the Chakra Stones for our Chakra work. 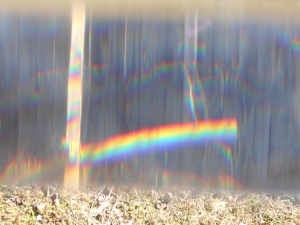 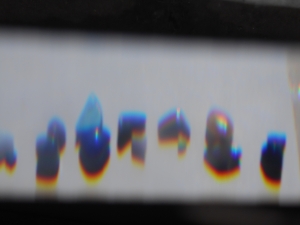 7 thoughts on “Breaking Down the Light”